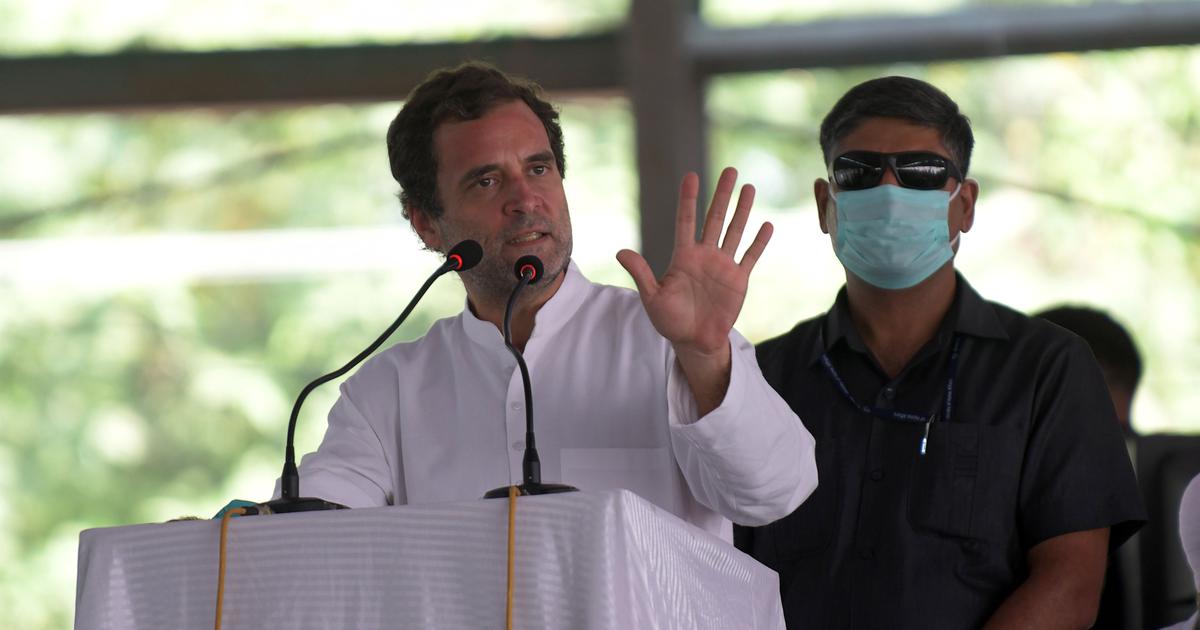 Congress leader Rahul Gandhi on Sunday said that Rashtriya Swayamsevak Sangh chief Mohan Bhagwat believed that India needs to be militarily better equipped against China as he secretly knew that Beijing has illegally occupied Indian territory in eastern Ladakh. Gandhi said that Bhagwat was “just scared” to face the truth.

In his annual address to the country on the occasion of Vijaya Dashmi at the organisation’s headquarters in Nagpur, Bhagwat said that India needs to grow bigger in “power and scope” than China. The RSS chief said this was necessary as Beijing was “shocked” at India’s response – an “unexpected jolt”– to its intrusion along the Line of Actual Control.

“Our defence forces, government and people responded sharply to China’s efforts to encroach on our territories,” he added. “We don’t know how it will react. So the way forward is to be alert and prepared. We should be more powerful than China in terms of military preparedness, economic conditions, international relations and also relations with neighbouring countries.”

But Gandhi said that Chinese intrusion was not a secret and took place because the Narendra Modi government and the Rashtriya Swayamsevak Sangh, the Bharatiya Janata Party’s ideological mentor, allowed it to happen.

“Deep inside, Mr Bhagwat knows the truth,” the Congress leader tweeted. “He is just scared to face it. The truth is China has taken our land and Government of India and RSS have allowed it.”

The standoff astride the Line of Actual Control in eastern Ladakh is in a stalemate since May, when Chinese troops moved to take control of the territory that had been patrolled by Indian soldiers for decades. The initial scuffles led up to a pitched battle – without firearms – in June that saw 20 Indian soldiers killed, with Beijing refusing to release casualty numbers on its side.

Attempts at military and diplomatic talks followed, with little success, although authorities on both sides periodically claim that the two Armies were disengaging and deescalating. Modi and the ruling Bharatiya Janata Party sought to downplay the incidents, with the prime minister insisting that there had been no intrusion despite reports that the Chinese were in control of huge swathes of territory previously patrolled by India across various sectors.

In August, The Hindu had reported that intelligence reports had informed the Indian government that Chinese troops are currently in control of as much as 1,000 square kilometres of area in Ladakh.

In September, Defence Minister Rajnath Singh too told the Rajya Sabha that China continues to illegally occupy approximately 38,000 square kilometre of land in Ladakh. Singh noted that China does not accept the “customary and traditional alignment” of the border and had attempted to transgress it. He stated those attempted transgressions “included Kongka La, Gogra and North Bank of Pangong Lake”.

Rahul Gandhi has repeatedly accused the government and Modi of giving away Indian land to the Chinese forces and of later trying to hide the reality.

In September, he accused the prime minister of destroying the “web of relationships” that his party had cultivated over the years with neighbouring countries. He warned the Centre that living in a neighbourhood with no friends would be dangerous.

On October 13, Beijing had said that it did not recognise Indian sovereignty over Ladakh and Arunachal Pradesh, claiming that India had illegally occupied Ladakh. In response, the Ministry of External Affairs said China has no locus standi to comment on the matter. The ministry said Ladakh as well as Arunachal Pradesh are integral parts of India and this has been conveyed to the Chinese side on many occasions.

After the sixth round of military talks on September 22, India and China had resolved to stop sending more troops to the frontline amid the border standoff. Both countries also agreed to take practical measures to properly solve problems on the ground and ensure peace in the border areas.

On September 10, External Affairs Minister S Jaishankar met his Chinese counterpart Wang Yi in Moscow on the sidelines of the Shanghai Cooperation Organisation summit. The two ministers agreed on a five-point plan to defuse tensions between the countries and said the current situation in the border areas of Ladakh was “not in the interest of either side”. They agreed, therefore, that the border troops of both sides should “continue their dialogue, quickly disengage, maintain proper distance and ease tensions”.