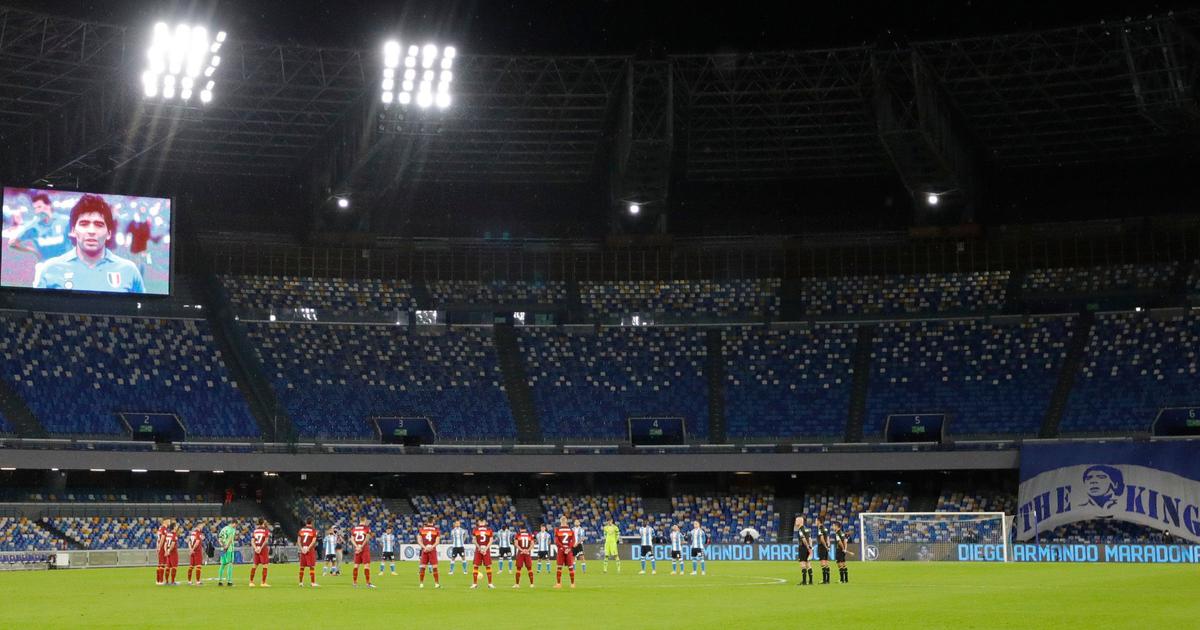 A “mourning” Napoli honoured their club legend Diego Maradona on Sunday with a 4-0 victory over Roma, as AC Milan extended their lead in Serie A by beating Fiorentina.

In Naples, players took to the pitch wearing a special Argentina-inspired jersey in tribute to Maradona, who died aged 60 on Wednesday.

Captain Lorenzo Insigne curled in a free-kick after half an hour, celebrating his goal by holding up and kissing the No. 10 jersey of the Argentina great.

“There is an air of sadness,” said Napoli coach Gennaro Gattuso. “This is a wonderful city even when the weather is bad and yet there is an atmosphere of mourning.”

A minute’s silence had been observed before the game, as in all matches in Italy, in memory of Maradona who spent seven years at Napoli.

A photo of Maradona was projected onto giant screens in the 10th minute, as players stopped to applaud.

Napoli’s jersey with white and light blue vertical stripes was specially designed to remember Maradona who led the club to their only league titles in 1987 and 1990 and the UEFA Cup in 1989.

“The city has done everything to honour him, the team too. Diego will always remain,” said Gattuso. “He is a legend, who has done something important. Those who have been lucky enough to see it cannot forget it.”

At the San Siro, Serie A top scorer Zlatan Ibrahimovic watched from the stands after picking up a muscle injury last weekend.

Head coach Stefano Pioli was also absent recovering from coronavirus, but Milan extended their unbeaten run in the league this season.

Franck Kessie set up Alessio Romagnoli for the opener on 17 minutes, with the Ivorian forward adding a second from the penalty spot 10 minutes later.

Fiorentina goalkeeper Bartlomiej Dragowski denied Kessie a second spot-kick goal in the first half after Martin Caceres fouled Theo Hernandez. Pioli spoke to the team by video link after the game.

Milan have now gone 21 league matches without defeat since Serie A returned in June following the coronavirus lockdown.

New Fiorentina coach Cesare Prandelli fell to his second defeat in as many games, with his side just three points above the relegation zone and without a goal in their last four games.

In Rome, Lazio’s players took to the pitch with special ‘AD10S’ jerseys in honour of Maradona, but slumped to a 3-1 loss to Udinese whose victory was paved by their Argentina players.

The hosts trailed after quarter of an hour when Argentine Roberto Pereyra set up Turkish midfielder Tolgay Arslan for Udinese’s first goal against Lazio at the Stadio Olimpico in six years.

Rodrigo De Paul then set up fellow Argentine Ignacio Pussetto for the second just before the break, and provided the assist for another compatriot Fernando Forestieri’s third midway through the second half.

After his goal, Pussetto opened his two hands wide, to symbolise the number 10. Forestieri dedicated the success to Maradona after the match, saying: “This victory is for him.”

Lazio looked weary after their 3-1 Champions League win in midweek over Zenit Saint Petersburg, but pulled a goal back through a Ciro Immobile penalty on 74 minutes. The Romans sit ninth, nine points behind AC Milan.

“It’s a bad defeat, we need to reset as soon as possible,” said coach Simone Inzaghi, whose side have picked up only five points from five home games this season.